Warm welcome to Dr. Feng Zhao who joined the group as a post-doc Research Officer under the supervision of Dr. Xianghua Xie. Feng obtained his first degree in a top university in China and PhD from HongKong.

At the same time, Dr. Ben Daubney is now moving to work on the same project that is funded by NISCHR Biomedical Research Unit on Medical Image Analysis and Visualization. 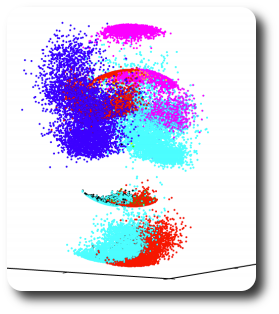 In this work a hierarchical approach is presented to efficiently estimate 3D pose from single images. To achieve this the body is represented as a graphical model and optimized stochastically. The use of a graphical representation allows message passing to ensure individual parts are not optimized using only local image information, but from information gathered across the entire model. In contrast to existing methods the poste- rior distribution is represented parametrically. A different model is used to approximate the conditional distribution between each connected part. This permits measurements of the Entropy, which allows an adaptive sampling scheme to be employed that ensures that parts with the largest uncertainty are allocated a greater proportion of the available resources. At each iteration the estimated pose is updated dependent on the Kullback Leibler (KL) divergence measured between the posterior and the set of samples used to approximate it. This is shown to improve performance and prevent over fitting when small numbers of particles are being used. A quantitative comparison is made using the HumanEva dataset that demonstrates the efficacy of the presented method.

B. Daubney and X. Xie, Entropy Driven Hierarchical Search for 3D Human Pose Estimation, In Proceedings of the 22nd British Machine Vision Conference, September 2011. The video of oral presentation (acceptance rate 8%). can be found from here. 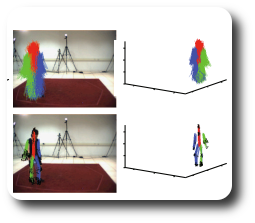 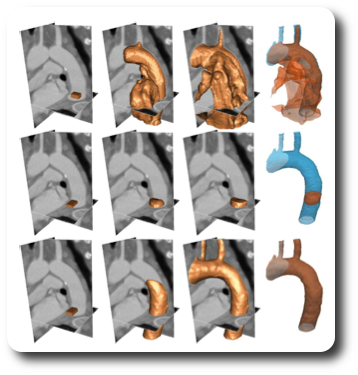 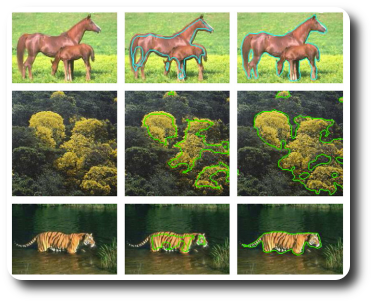 We present a study in level set representation and evolution using radial basis functions (RBFs) for active contour and active surface models. It builds on recent works by others who introduced RBFs into level sets for structural topology optimisation. Here, we introduce the concept into deformable models and present a new level set formulation able to handle more complex topological changes, in particular perturbation away from the evolving front. In the conventional level set technique, the initial active contour/surface is implicitly represented by a signed distance function and periodically re-initialised to maintain numerical stability. We interpolate the initial distance function using RBFs on a much coarser grid, which provides great potential in modelling in high dimensional space. Its deformation is considered as an updating of the RBF interpolants, an ordinary differential equation (ODE) problem, instead of a partial differential equation (PDE) problem, and hence it becomes much easier to solve. Re-initialisation is found no longer necessary, in contrast to conventional finite difference method (FDM) based level set approaches. The proposed level set updating scheme is efficient and does not suffer from self-flattening while evolving, hence it avoids large numerical errors. Further, more complex topological changes are readily achievable and the initial contour or surface can be placed arbitrarily in the image. These properties are extensively demonstrated on both synthetic and real 2D and 3D data. We also present a novel active contour model, implemented with this level set scheme, based on multiscale learning and fusion of image primitives from vector-valued data, e.g. colour images, without channel separation or decomposition. 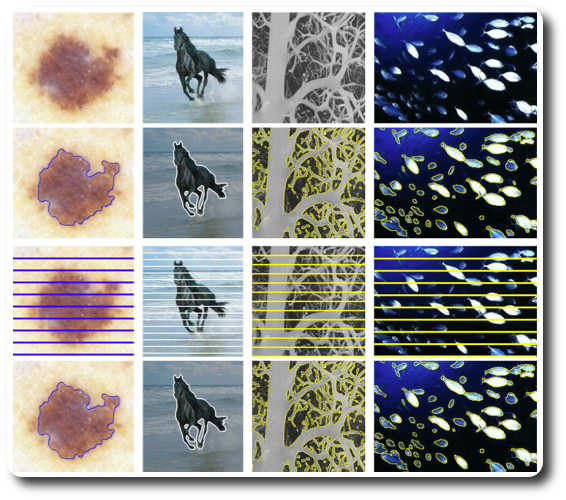 This paper presents an extension of our recently introduced MAC model to deal with the initialization dependency problem that commonly appears in edge-based approaches. Its dynamic force field, unique bidirectionality, and constrained diffusion-based level set evolution provide great freedom in contour initialization and show significant improvements in initialization independency compared to other edge-based techniques. It can handle more sophisticated topological changes than splitting and merging. It provides new potentials for edge-based active contour methods, particularly when detecting and localizing objects with unknown location, geometry, and topology.

The 2010 Wales RIVIC Visual Computing Graduate School is a four-day meeting, bringing distinguished international scientists in computer graphics, computer vision, image processing, visualization, and other areas of visual computing together to share their expertise, knowledge, wisdom, and vision with young researchers (e.g. PhD students and PostDocs). The school provides a stimulating opportunity for young researchers and Ph.D. students. The participants will benefit from direct interaction and discussions with leaders in Visual Computing. Participants will also have the possibility to present the results of their research, and to interact with their scientific peers, in a friendly and constructive environment. The Graduate School offers scientists and researchers a rare opportunity to explore the future research directions of visual computing, especially the convergence of its different areas. The event features insightful talks from keynote speakers, research presentations, discussion panels, and PhD forums. Its informal social events provide young researchers a valuable opportunity to exchange research experience and explore potentials for collaboration.

We propose an active contour model using an external force field that is based on magnetostatics and hypothesized magnetic interactions between the active contour and object boundaries. The major contribution of the method is that the interaction of its forces can greatly improve the active contour in capturing complex geometries and dealing with difficult initializations, weak edges and broken boundaries. The proposed method is shown to achieve significant improvements when compared against six well-known and state-of-the-art shape recovery methods, including the geodesic snake, the generalized version of GVF snake, the combined geodesic and GVF snake, and the charged particle model.